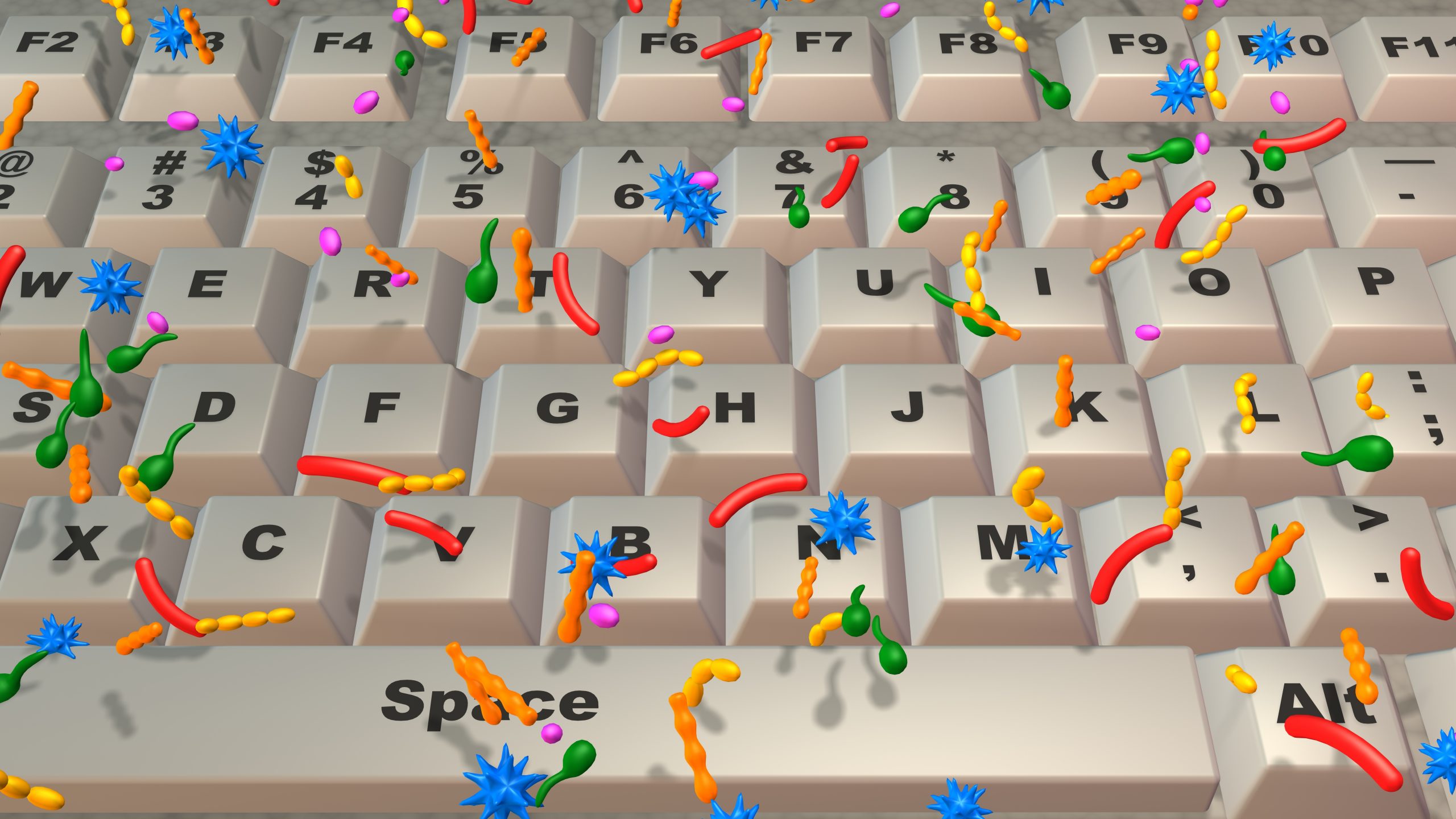 We all try to keep our kitchens and bathrooms clean and bacteria-free. But how clean are our offices, computers, and keyboards? Most of us spend many hours every week typing at a computer, but rarely think to clean it. How dirty can our desks get?

A study at Chicago’s Northwestern Memorial Hospital found that two deadly drug-resistant types of bacteria (vancomycin-resistant Enterococcus faecium (VRE) and methicillin-resistant Staphylococcus aureus (MRSA)) could survive for up to 24 hours on a keyboard, while another common but less deadly bug (Pseudomonas aeruginosa) could survive for an hour.[2]

How Do Bacteria Get on Your Desk and Keyboard?

Although many of these bacteria won’t hurt you unless your immune system is weak because of another illness, it could still cause an infection in you have a cut on your fingers (even a tiny one you can’t see).It is still wise to be careful, especially if you are sharing a computer with other people. For example, if the person who used the keyboard before you was coming down with the flu, it is possible that you could catch the flu from using the keyboard afterwards.

A good precaution is to wash your hands before and after using a shared computer, telephone or other equipment and to encourage others to do the same. It is not a good idea, either, to eat at your computer, especially if you share it with others. When you eat and then type, you are probably transmitting bacteria from your mouth to the keyboard (not to mention getting crumbs everywhere).

With more and more doctors switching to electronic patient records, keyboard bacteria are becoming a problem in hospitals as well.

This could lead to serious problems in hospitals since many people could potentially use the same computer and then transmit the bacteria to patients. People who are already sick may be more vulnerable to bacterial infections, so hospital patients may be more likely to become seriously ill from bacteria transmitted from computers and health care workers’ hands.

Researchers have found that a good way to prevent the transmission of this type of infection is for health care workers to wash their hands and to have computer keyboards disinfected on a regular basis.[3] [4]

What Can You Do to Keep Your Computer Clean?

Remember that everything you touch does not have to be sterile in order to be safe. There are bacteria all around us and most of them will not make us sick. Having some bacteria on your keyboard will not necessarily hurt you.

There are some bacteria, though, that can make us sick, so washing your hands before and after using your keyboard is a good idea. For everyday hand washing, regular soap and water are effective to kill bacteria. Special antibacterial soap is not necessary outside of health care settings. Alcohol-based hand rub can also take the place of hand-washing if your hands are not visibly dirty or greasy.

If something disgusting happens to your keyboard or it is very dirty, here are some steps to clean it.

It is possible to take the keys off of some keyboards for a more thorough cleaning, but not usually necessary, since it is most important to clean the parts you touch the most.

Remember, simple hand washing is always the best way to stop the spread of bacteria!